A Brief History of Moeckel Pond

Foreword: What follows is a coarse overview of a long history complicated by hand
written records, property boundaries described by marks on trees and a limited
understanding of the property transfers that occurred over the years. Drawn from a variety of sources, it is meant to serve as a starting point for those who may have interest in the topic. Please accept my apologies for any omissions, or errors. Corrections will be gladly accepted.

The pond currently known in Windham as Moeckel Pond is delineated on State of New Hampshire maps as Simpson Pond. Its history dates back over 200 years to a time near the founding of our country.

Alexander Simpson, his wife, and brother-in-law Adam Templeton came from Ireland and bought property of James Wilson on November 24, 1747. Alexander was an exceedingly fine weaver and Adam was a maker of spinning wheels.

In 1757 Alexander acquired a property from Londonderry. It is unclear if this was what would become the pond property.

At this point the genealogy becomes a little fuzzy, with some inter-marrying between distant Simpson cousins. In 1788 Joseph Simpson, the son of William Simpson and Mary Haynes of Portsmouth, moved to Windham, and according to L.A.Morrison, built Simpson’s Mills. He was reputed to be a fine carpenter and millwright.

Another document from Pelham states, Simpson’s Mill, was built by a company of men from Pelham and Windham in 1789 and was used at various times as a sawmill and as a grist mill powered by water from the pond created by building a dam on Golden (or more properly Goldings) Brook.

Some deeds in Rockingham Country refer to this mill as Gages Saw Mill. It is also interesting to note that the road currently known as Moeckel Road is a segment of Simpson or Simpson Mill road that connected Windham and Pelham to the Mill and other Simpson properties in the area.

Again the deed search has left some confusion that will be remedied by further study. There appear to be a number of owners over the years. Thomas W. Simpson seems to be the mill owner and operator for most of the 19th century.

It is reasonable to believe this mill and others like it changed life in early Windham and Pelham in several ways. Mills like this generally supplied local markets playing an important role in the local economy. They provided a source of lumber for building, a means of turning grains into useful products for cooking and a source of employment at the mill and in the businesses that surrounded the mill. Each mill was a hub of industry for its area. 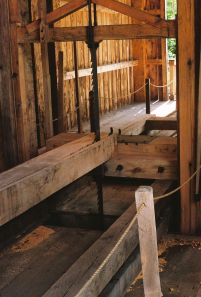 Based on the design as we understand it at this time, this sawmill probably used a vertical saw possibly powered by an overshot wheel. Local labor would have built build most of the components, perhaps buying the iron saw blade from Boston or even Britain. The village mill took the place of the “top sawyer” and “pitman” who, provided power by pulling up and on a flexible whipsaw. It is estimated that a single sawyer in a mill could produce as much lumber in a day as a pair of sawyers could produce in a week by hand. This would have substantially changed the rate of growth and development in the village, not to mention employing many more loggers, teamsters and builders to feed the mill and use the output of the mill.

There is no New Hampshire industry which exemplifies the independent Yankee spirit more than the forest products industry. It began in 1634, when New Hampshire sent its first cargo of masts to England, destined for the great ships of the Royal Navy. By 1652, white pine was the premier mast making material. As a result, the King decreed all mast trees growing in the colonies were the property of England. New Hampshire’s citizens strongly disagreed and rioting broke out in Exeter and Weare. Soon after, New Hampshire’s patriots joined in the American Revolution, not for tea but to protect their timber supply. It is likely that many of our own Windham Patriots were driven by such motivation. Furthermore, New Hampshire’s sawmills played a key role in the war for Independence. They cut boards for many important uses, such as wagons and ships.

According to one historian, no community was complete without at least one sawmill. Simpson’s mill was more than a sawmill. As evidenced by the large millstones in the current pond outflow, it was also a gristmill (grain mill). It appears there were two sets of mill stones allowing for grinding different grains or regulation of how finely the grain was ground. A customer would pay a toll, or fraction of the grain (typically 1/16th of the grain) he brought to the mill in exchange for having this corn, rye, or wheat ground into meal. It is likely that T. W. Simpson, like most 19th century New England grist mill owners was a prosperous man, contributing to the growth and welfare of the town. 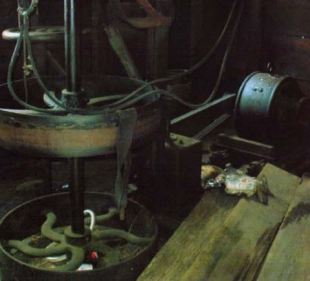 Over the years, the mill has been ravaged by nature and essentially ceased to exist. The Great New England Hurricane of September 1938 added to the damage to the structure itself. One reminder is the pairs of giant millstones that have fallen into the outflow of the dam.

On one of the ensuing deeds indicating the transfer of the pond from John J Drizau (may be misspelled) to Albion J. Simpson, the pond is described as “the land in Windham covered by the water at the height of the dam at the time of conveyance by T. W. Simpson to John J.” a phrase that has become pond lore around Rock and Moeckel Ponds. At one point in time the height of the dam was significantly increased, as rumor goes, to take advantage of the additional land the water encompassed.
There were a number of owners before it is acquired by the Town of Windham on a tax lien and sold to Wendell Torrey in January 1921 for taxes due. The following May, The pond and dam were sold to William J. and Gertrude C. Moeckel. 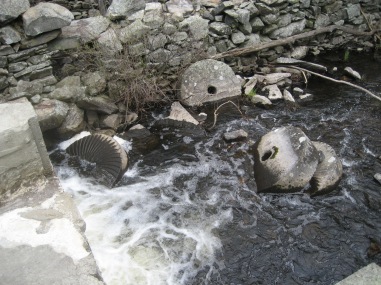 Gertrude and William purchased and placed into service an electric turbine to take advantage of the power of water flowing from the pond. An above ground electric wire went from the turbine to their house to be used for electric space heaters. Kerosene lanterns continued to provide the lighting throughout the house until electricity was run up the road in 1956 or 1957. Another electric line was run to a “32 volt” shed where batteries were charged. It is not clear at this time how the batteries were used. It like all the other aspects of the mill and the dam the generating station has fallen into disrepair.

The pond has remained in the hands of the Moeckel family through the present day. On June 21, 1963 after becoming widowed, Gertrude C. Moeckel transferred property to Gertrude E. M. Linton and James R. Linton which included the Pond and the dam.

Upon the death of Gertrude Linton in 2009, the property passed from her trust to a triumvirate of owners in the hope that it could be used for the greater good.  Unfortunately, an unrepaired crack in the dam has forced the draining of the mill pond, leaving a muddy meadow unable to sustain the wildlife that once dwelt there. Much of the surrounding wooded property in the estate was still wild and was purchased by local Conservation Commissions.  The pond and dam property, also unspoiled, was donated by the inheritors to Friends of Moeckel Pond.  This non-profit organization is charged with restoring the pond, for public good. In cooperation with the Windham Conservation Commission, Windham Historic District/Heritage Commission, Windham Endowment, and Windham Fire Department, efforts are underway to restore pond and dam in order to return and sustain the wildlife that once thrived there. 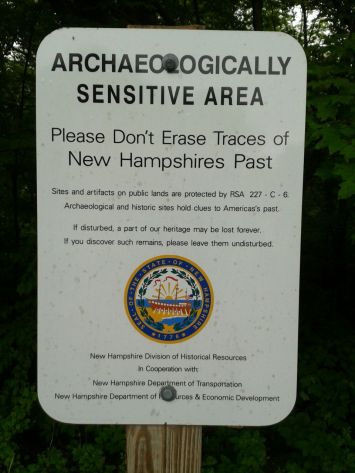 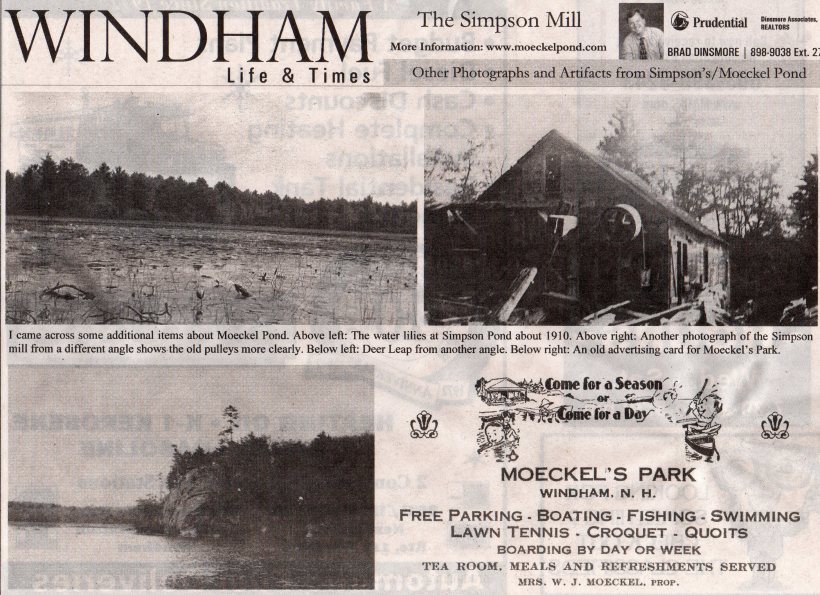 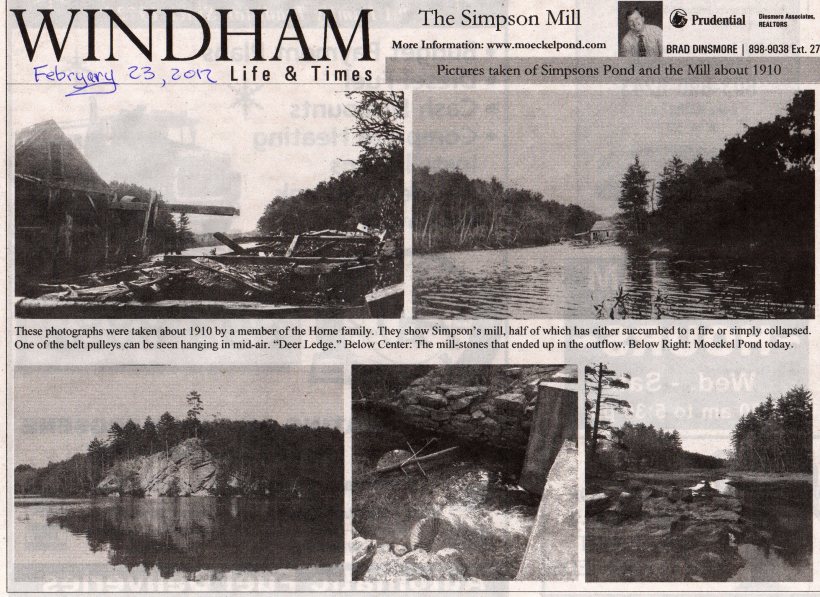